The issue of slavery in Canada has long been glossed-over by historians and by Canadian society in general. Substantive recognition of this past history of slavery did not begin until the 1960s. Nevertheless, slavery was actively practised in New France, both in the St. Lawrence Valley and in Louisiana. This institution, which endured for almost two centuries, affected the destiny of thousands of men, women and children descended from Aboriginal and African peoples. 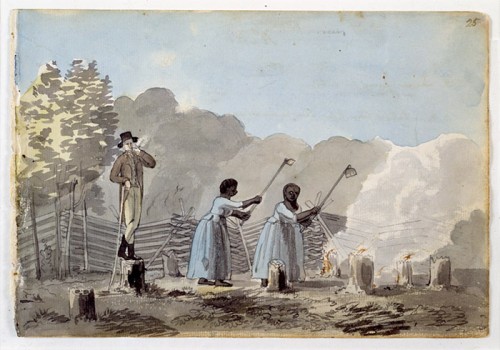 Labouring under the eye of the overseer, end of the eighteenth century

The Introduction of Slavery in Canada

Slavery was introduced to New France in stages.  A first slave, a young boy originally from Madagascar or Guiney, arrived with the Kirke brothers in 1629. Before leaving Quebec three years later, the latter sold him for the sum of 50 écus.  The boy soon passed into the hands of the colonist Guillaume Couillard and received the name “Olivier Le Jeune”.  As Le Jeune was described as Couillard’s “domestique” (servant) in the record of his burial in 1654, it is plausible that he had been manumitted by his master.

This exception aside, black slaves arrived in Canada only towards the end of the seventeenth century.  Despite colonial officials’ oft-reiterated yearning to have African slaves imported to the colony, no slave ship ever reached the St. Lawrence valley.  Those black slaves who arrived in the region came from the neighbouring British colonies, from which they were smuggled or where they were taken as war captives.  A number of Canadian merchants also brought black slaves back from their business trips to the south, in Louisiana or in the French Caribbean. 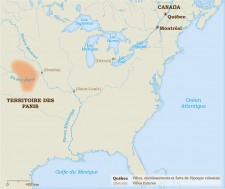 The geographic origin of African slaves

In Canada, the majority of slaves were not of African, but rather of Aboriginal origin.  Native populations customarily subjugated war captives before the arrival of the French, but this practice acquired new meanings and unprecedented proportions in the context of western expansion.  Beginning in the 1670s, the French began to receive captives from their Aboriginal partners as tokens of friendship during commercial and diplomatic exchanges.  The Illinois were notorious for the raids which they led against nations to the southeast and from which they brought back captives.  By the early eighteenth century, the practice of buying and selling these captives like merchandise was established.

The ethnic origin of Aboriginal slaves is occasionally specified in period documents.  They included Foxes and Sioux from the western Great Lakes, Inuit from Labrador, Chickasaws from the Mississippi valley, Apaches from the American southeast, and especially “Panis”.  The latter designation can be misleading.  In its strictest sense it referred to the Pawnees, a nation which inhabited the basin of the Missouri River and which was heavily targeted by the allies of the French.  Amongst colonists, however, their name rapidly became a generic way of referring to any Aboriginal slave.  Many an “esclave panis” (Panis slave) who show up in the records, thus, was not Pawnee at all.

The situation was rather different in Louisiana.  At the time of this colony’s establishment in the early years of the eighteenth century, Aboriginal slaves were harder to acquire and retain in bondage.  Colonists, particularly planters, moreover preferred African slaves, whom they judged more apt to work in their indigo and tobacco fields.  In Louisiana, the slave trade from Africa thus began in 1719.