‘Ashanti Kingdom’ One Of The Richest Kingdoms in Africa

The Ashante Empire  was an Akan empire and kingdom from 1701 to 1957, in what is now modern-day Ghana. It expanded from Ashanti to include the Brong-Ahafo Region, Central Region, Eastern Region, Greater Accra Region and Western Region of present-day Ghana. Due to the empire’s military prowess, wealth, architecture, sophisticated hierarchy and culture, the Ashanti Kingdom has been extensively studied and has more historiographies by European, primarily British authors than any other indigenous culture of Sub-Saharan Africa.

Starting in the late 17th century, the Ashanti king Osei Tutu (c.  1695 – 1717) and his adviser Okomfo Anokye established the Ashanti Kingdom, with the Golden Stool of Asante as a sole unifying symbol. Osei Tutu oversaw a massive Ashanti territorial expansion, building up the army by introducing new organisation and turning a disciplined royal and paramilitary army into an effective fighting machine. In 1701, the Ashanti army conquered Denkyira, giving the Ashanti access to the Gulf of Guinea and the Atlantic Ocean coastal trade with Europeans, notably the Dutch.

Today, the Ashanti Kingdom survives as a constitutionally protected, sub-national proto-state and traditional state in union with the Republic of Ghana. The current king of the Ashanti Kingdom is Otumfuo Osei Tutu II Asantehene. The Ashanti Kingdom is the home to Lake Bosumtwi, Ghana’s only natural lake. The state’s current economic revenue is derived mainly from trading in gold bars, cocoa, kola nuts and agriculture; forests have also been cleared to plant cassava, maize and yams.

Ashanti political organization was originally centered on clans headed by a paramount chief or Amanhene. One particular clan, the Oyoko, settled in the Ashanti’s sub-tropical forest region, establishing a center at Kumasi. The Ashanti became tributaries of another Akan state, Denkyira but in the mid-17th century the Oyoko under Chief Oti Akenten started consolidating the Ashanti clans into a loose confederation against the Denkyira.

The introduction of the Golden Stool (Sika dwa) was a means of centralization under Osei Tutu. According to legend, a meeting of all the clan heads of each of the Ashanti settlements was called just prior to declaring independence from Denkyira. In this meeting the Golden Stool was commanded down from the heavens by Okomfo Anokye, chief-priest or sage advisor to Asantehene Osei Tutu I and floated down from the heavens into the lap of Osei Tutu I. Okomfo Anokye declared the stool to be symbolic of the new Asante Union (the Ashanti Kingdom), and allegiance was sworn to the stool and to Osei Tutu as the Asantehene. The newly declared Ashanti union subsequently waged war against and defeated Denkyira. The stool remains sacred to the Ashanti as it is believed to contain the Sunsum — spirit or soul of the Ashanti people. 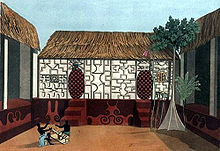 Picture of Ashanti architecture drawn by Thomas Edward Bowdich, with Adinkra symbols on the walls.

In the 1670s the head of the Oyoko clan, Osei Kofi Tutu I, began another rapid consolidation of Akan peoples via diplomacy and warfare. King Osei Kofu Tutu I and his chief advisor, Okomfo Kwame Frimpong Anokye led a coalition of influential Ashanti city-states against their mutual oppressor, the Denkyirawho held the Ashanti Kingdom in its thrall. The Ashanti Kingdom utterly defeated them at the Battle of Feyiase, proclaiming its independence in 1701. Subsequently, through hard line force of arms and savoir-faire diplomacy, the duo induced the leaders of the other Ashanti city-states to declare allegiance and adherence to Kumasi, the Ashanti capital. From the beginning, King Osei Tutu and priest Anokye followed an expansionist and an imperialistic provincial foreign policy. According to folklore, Okomfo Anokye is believed to have visited Agona-Akrofonso.

Image of an Ashanti home in Kumasi, before British colonization.

Realizing the strengths of a loose confederation of Akan states, Osei Tutu strengthened centralization of the surrounding Akan groups and expanded the powers of the judiciary system within the centralized government. This loose confederation of small city-states grew into a kingdom and eventually an empire looking to expand its borders. Newly conquered areas had the option of joining the empire or becoming tributary states.  Opoku Ware I, Osei Tutu’s successor, extended the borders, embracing much of Ghana’s territory.

The Asante Ewer was made in England during reign of Richard II(1377–1399) and was discovered in 1896 in the Asante kingdom. The front of the jug bears the royal arms of England and each of the facets of the lid contains a lion and a stag. These symbols date the jug to the last 9 years of Richard’s reign, when he adopted the badge of the white hart. Two more English bronze jugs from the same period were found at Kumasi, the Asante capital, at the time as this example. Perhaps all 3 were a set from the household of Richard II. How they came to the west coast of Africa remains a mystery, but there was extensive trade between West Africa and Western Europe across the Sahara Desert in the Middle Ages. Now it is in the British Museum, London.

European contact with the Asante on the Gulf of Guinea coast region of Africa began in the 15th century. This led to trade in gold, ivory, slaves, and other goods with the Portuguese, which gave rise to kingdoms such as the Ashanti. On May 15, 1817 the Englishman Thomas Bowdich entered Kumasi. He remained there for several months, was impressed, and on his return to England wrote a book, Mission from Cape Coast Castle to Ashantee. His praise of the kingdom was disbelieved as it contradicted prevailing prejudices. Joseph Dupuis, the first British consul in Kumasi, arrived on March 23, 1820. Both Bowdich and Dupuis secured a treaty with the Asantehene. But, the governor, Hope Smith, did not meet Ashanti expectations.

Slavery was historically a tradition in the Ashanti Empire, with slaves typically taken as captives from enemies in warfare. The welfare of their slaves varied from being able to acquire wealth and intermarry with the master’s family to being sacrificed in funeral ceremonies. The Ashanti believed that slaves would follow their masters into the afterlife. Slaves could sometimes own other slaves, and could also request a new master if the slave believed he or she was being severely mistreated.

The modern-day Ashanti claim that slaves were seldom abused, and that a person who abused a slave was held in high contempt by society. They defend the “humanity” of Ashanti slavery by noting that those slaves were allowed to marry, and that their children were born free. If a master found a female slave desirable, he might marry her. He preferred such an arrangement to that of a free woman in a conventional marriage, because marriage to an enslaved woman allowed the children to inherit some of the father’s property and status.

This favored arrangement occurred primarily because of what some men considered their conflict with the matrilineal system. Under this kinship system, children were considered born into the mother’s clan and took their status from her family. Generally her eldest brother served as mentor to her children, particularly for the boys. She was protected by her family. Some Ashanti men felt more comfortable taking a slave girl or pawn wife in marriage, as she would have no abusua (older male grandfather, father, uncle or brother) to intercede on her behalf when the couple argued. With an enslaved wife, the master and husband had total control of their children, as she had no kin in the community.