It’s been almost 40 years since Bob Marley died, but as his daughter tells it, his music and fight has never been more relevant.

“My father was the voice for the voiceless,” says Cedella Marley. “If he were still here, he would be on the forefronts protesting; he would still be speaking up for those who aren’t being heard.”

A Grammy-winning singer in her own right (as part of Ziggy Marley and the Melody Makers), and a noted fashion designer in Jamaica, Cedella Marley spoke to Rolling Stone on the occasion of a new apparel collection and charitable partnership with Wrangler, which seeks to honor her father’s legacy in fashion and social justice.

Launching this week, the Wrangler x Bob Marley Collection celebrates the reggae icon’s laid-back style, which often included Wrangler: Marley famously wore the denim brand’s shirts and jean jackets throughout appearances in the Seventies. As part of the new collaboration, Wrangler is making a $25,000 donation to the Bob Marley Foundation, a non-profit organization dedicated to social change through education, culture and community development.

The new collection coincides with the Marley family’s year-long celebration of what would have been Bob Marley’s 75th birthday. While the original plan was to launch the collaboration on 4/20 (a date famously associated with the singer and his cannabis advocacy), it was pushed back due to the coronavirus outbreak, and out of respect for the protests supporting the growing Black Lives Matter movement.

2020 has been all about celebrating daddy’s 75th Birthday with a multitude of fun and thoughtful activations in honor of his legacy,” Marley says. “What we didn’t anticipate was a pandemic, and such global devastation and social unrest, so it was crucial for us to use our platform and partnerships for the greater good in helping lift others more than ever, not just with his music and message, but with real concrete actions, too.”

Cedella Marley is currently the acting director of the Bob Marley Foundation, and she says the donation from Wrangler will directly impact the black community in Jamaica, with “priority attention” given to special needs children, children from single parent homes, and homes where parents are unemployed. The program continues a tradition started by Bob Marley, of giving financial assistance to parents in Trench Town, the working-class neighborhood where he grew up.

As for the clothing, the capsule collection features classic Wrangler pieces re-worked with images and iconography from Marley’s career, along with Jamaican colors and motifs. Wrangler also replicated a red tee that Marley wore during one of his performances. There are 11 pieces in total (for both men and women), including a mix of re-worked denim jackets, lasered denim shirts, and graphic tees, all produced in limited edition.

Wrangler says its design team worked closely with the Marley family to capture the singer’s “free spirit, as well as the strength and truth of his convictions.” The two have been working on the collection for almost a year, and family members say they’re excited to finally see the partnership come to fruition, especially during this time.

“While it has always been a focus of ours, we knew it was super important to ensure our collaborations also help provide relief to those in need,” Cedella Marley explains. “We are excited to continue to celebrate daddy and his message of love and unity, especially during these difficult times.” 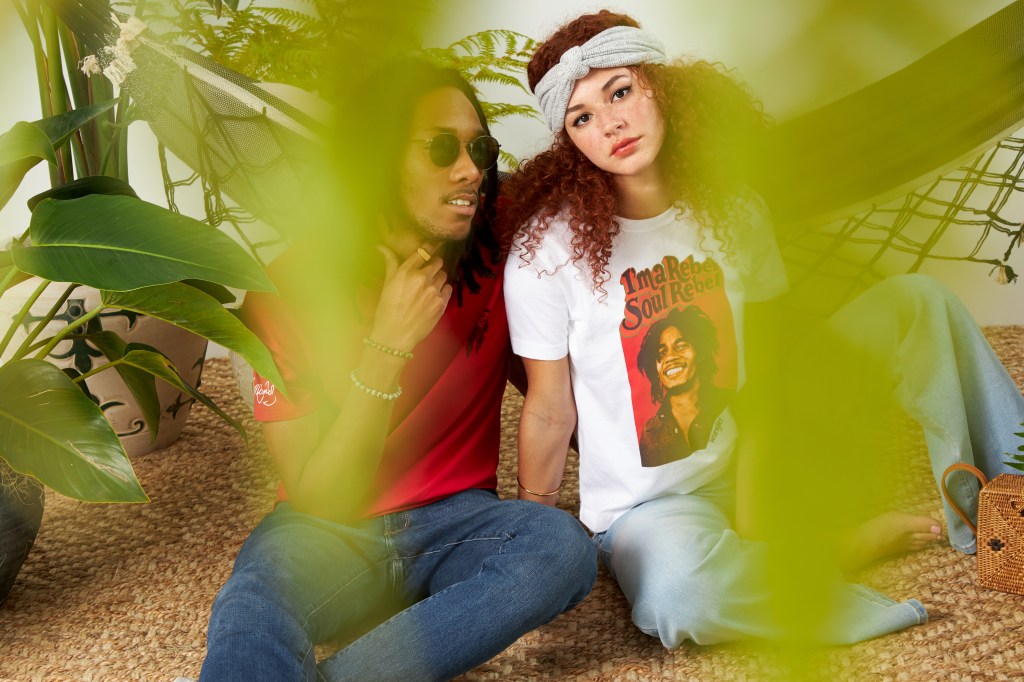 As for how she thinks her father would react to the current health crisis and civil unrest in the world, Marley says he would have continued to preach his message of peace and understanding.

“Dad wanted people to come together and have a world where people were unified and not divided,” she says. “He would have been frustrated that something like COVID-19, that should have brought us closer, exposed many other pandemics — a cultural pandemic, a race pandemic [and] a gender pandemic.”

“The lesson,” she shares, “is to never stay quiet when you know there is injustice in the world. Daddy was for the people, and his message continues to transcend ages, generations, race and gender, because what he spoke was the truth,” she says. “He wanted a world that sees no boundaries, no hierarchy, no division. [It’s] something we all still strive towards and hope for some day.”