Ghanaian Reggae Musician, Shasha Marley, has said that while he took a break from the active recording of music to focus on family life, his ‘Lost and Found’ album still makes him relevant in the music circles.

An interview with Happy FM’s Doctor Cann on the ‘Showbiz Xtra’ show in Accra Ghana , he likened the music on his album to Bob Marley’s songs he made in the nineties which is still played today.

“The quality of my ‘Lost and Found’ album which had the hit Maata Family is just like Bob Marley releasing a song in 1976 or 1977. For example, Bob Marley’s song ‘One Love’, was released in 1965. But why are we still playing it? It is because of the quality.

I have a song on the album called ‘I am not ashamed of the gospel’. In Ghana here, people don’t usually play it. But as I am talking now, it is the number one song in East Africa and I recorded it back in 2007. That album is still trending everywhere in the world. It is just that back home we got so much affiliated with Maata Family. I have fourteen songs on that album. I am still in the system”. 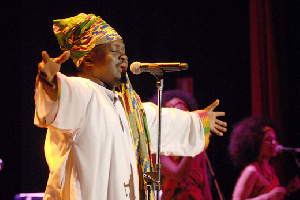 The ‘Maata Family’ hitmaker was of the view that the Ghanaian media does not give the needed airplay to reggae music. However, he is not discouraged because his music is recognized all over the world.

“Reggae is not getting the airplay that it should have like the other genres. But, I am not discouraged because I don’t do reggae music for only Ghana. My song is a big hit in Kenya. Just this morning, a DJ in South Africa too asked for my new one”, he added.

Shasha Marley disclosed that he is out with a new single titled ‘The Dawn’.